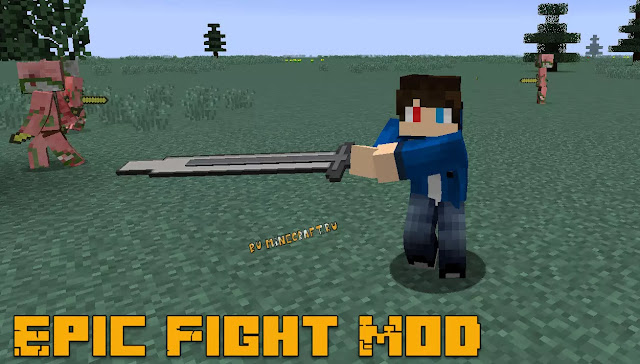 Minecraft mods and add-ons are one of the best way to add brand new features to any gamer’s next survival or creative world. Some mods are quite simple, only adding few new mob or animals, while others completely different and can redesign the world’s functionality. There are tons of mods available for gamers to choose from, making it hard to find the perfect one for you.

Luckily, here I am going to show one of the most popular mod for the Minecraft Pocket Edition. This mod’s goal is to provide a brand new combat experience. It does this by adding few better animations as well as new weapons and special mechanics to weapons with each type of weapon having a unique use.

This Epic Fight Mod is playable in both survival and creative mode. You can use different crafting recipes to craft those weapons.

ALSO READ- How to Play Lucky Block Mod on Minecraft

This epic fight mod Minecraft PE comes with some awesome weapons with extraordinary movement animations. Here are some of the weapons.

Longswords: Its a heavy damage weapon available in the normal weapon shelf. And can be dual wielded also it has a dash/sprint attack

spears: Spears are low damage weapon but enough to kill any mob or animal and it has a dash, sprint attack also throwable.

lances: This is a massive weapon with the most high attack deals more damage when on a horse or player is sprinting.

katanas: katanas is a straight blade with one side curved edge. It does normal damage like other weapons. It has two variants the wakizashi and the uchi. You can equip the uchi on your off hand and wakizashi on main hand.

sabers: Because of saber’s curvature it does more damage than normal blades avaliable in minecraft. It can defence enemy attacks.

daggers: Its a normal weapon with normal damage. But it has a special assasinate mechanic that lets you shot or highly damage mobs or animals when sneaking whilst invisible. This can be held in the off hand for a extra dagger damage.

bec de corbin: Bec de corbin is only available in iron varient. It has two modes- craft to switch and it also has a special sprint attack maces fair damage stuns enemies. But dals lower damage on horseback.

Follow the process mentioned below to download and install the Epic Fight Mod in your Minecraft Pocket Edition. You can install this mod in any version of minecraft pe.

Thats it now you are ready to enjoy the Epic Fight Mod. Try this new mod and let me know how’s it? This is for today. See you in the next article.

How to Build House in Minecraft – Modern House in 10 sec