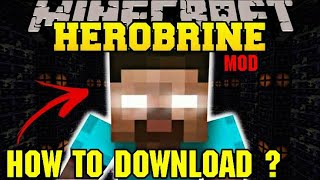 Minecraft legend of Herobrine has now become so popular that there is an entire stream of different mods that allow its gamers to add the mysterious body to your world. There are hundreds of herobrine mods available, most of these mods try to remain faithful to the existing lore of Herobrine and add the usual signs of Herobrine corruptions.

Additionally, Some Herobrine mods also allow you to actually summon Herobrine into your world. These mods allow you to fight against Herobrine as you would any other mob boss in Minecraft. Each mod adds some different abilities to the Herobrine legend and gamers can fully enjoy the urban legend that has captured the imagination of all Minecraft fans for a decade.

In this article I will show exactly How to Summon Herobrine. To summon herobrine you firstly need to install a Herobrine Mod. Here I will provide the best Herobrine mod available for the Minecraft Pocket Edition.

After this process now you can easily spawn spawn Herobrine in your world.

How to Spawn Herobrine

To spawn herobrine in your world you just need to find the herobrine head from your inventory. Make sure to create a creative world to find herobrine head. Now place 3*3 gold block and place mossy cobblestone in between.

Place the herobrine head on the mossy cobblestone and wait for 20 sec. And the legend of Herobrine will spawn.

Actually, Herobrine is rumored to be Notch’s dead brother who, by some act of the supernatural event, was actually embedded into the Minecraft coding.

Herobrine was said to be act as creepy and dangerous ways. Claims include pyramids being found in the middle of the ocean, tunnels in mountains that looked like they were man made and trees being found without any initial leaves.

What happens when you summon Herobrine?

You cannot summon a Herobrine in the vanilla Minecraft. However, Herobrine can be added to the game with some specific mod. The behavior of the Herobrine would depend on the features of the mod you choose to use. Here in these article I shared one of the best Herobrine mod.

What version of Minecraft is Herobrine in?

Mojang, the parental company of Minecraft, has repeatedly denied ever having added Herobrine to any version of the game. In fact, since 2010, mojang have been adding ‘Removed Herobrine’ in the change log of every update.

How do you find Herobrine in Minecraft?

There is no way to find Herobrine in an normal Minecraft survival gameplay. However, you can always use some specific mods to add Herobrine to your gameplay and have some fun with the urban legend that has haunted Minecraft gamers for so long.

How do you get Herobrine skin in Minecraft?

Herobrine is so really popular amongst the Minecraft gamers community that there are many skins based on the character. A great place to find an appropriate Herobrine skin can be found on many websites.

How to Use Minecraft Morph Mod