How to Use Voice Chat in Among Us mobile

Communication is key is key if you’re trying to find out who is the Imposter in Among Us, the social deduction game hit available on PC, Android, and iOS. In Among Us, Crewmembers must work together to figure out which of the players is the imposter, while imposters must try their best to lurk in the shadows and take out the crew. It’s a very intense and very fun game that is perfect for parties and gatherings.
Still now, Among Us doesn’t feature any in-game voice chat, but there are some options if you want to talk with your group.
But Just because Among Us doesn’t feature in-game voice chat doesn’t you can’t voice chat with your friends, you’ll just have to do it through other means. so we have to Use a third-party voice chat.

Among us voice chat

Communicate with players Within the game, players were only provided with a standard text chat box where everyone could discuss while they played. Originally, there was no regular voice chat available or anything like that, so players would have to find a way around this if they wanted a voice chat.

Recently, However, the developers of among us have paired up with Discord to provide an in-game voice chat for players to use and set up in their way. Discord works fine for any platforms. Also you’ll get chat rooms there. you can effectively use voice chat during any situation like emergency meeting. Another rule that players should mute themselves if they have been killed.

How to use the Discord in Among Us

Discord allows you to speak with one another while playing. Having the Discord enabled while playing Among Us helps keep the chaos to as much of a minimum as possible.

Setting up the Discord overlay for playing Among Us

I already made a server for you guys to play among us. you just have to download discord and join this server- ARCHAKgaming 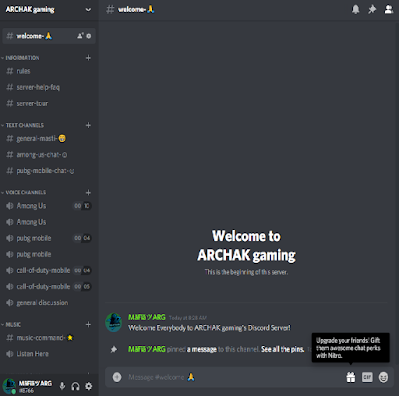 Follow this steps shown in this video for further details…