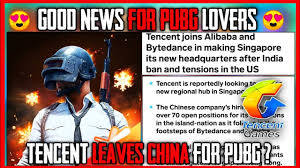 After India setback on PUBG and pushback in USA, Tencent is ready to set up a regional hub in Singapore. According to Bloomberg, Tencent Holdings Ltd. has picked Singapore as its main center for Asia, joining rivals Alibaba Group Holding Ltd. and ByteDance Ltd. in the race to build up their presence closer to home after setbacks by the U.S. and Indian goverment.

Are they trying for India comeback via Singapore ? No one has any clarity on this

But the tech giant had been considering setting up its regional hub in the city-state, as well as shifting some of its business operations out of China.

Apart from opening a new Headoffice in Singapore to support [their] growing business in Southeast Asia and beyond, it will also recruit people for tech and business development, the company said in a statement. Its hiring site features dozens of job openings, including posts for cross-border commerce, cloud computing, and esports.

One of The China’s biggest social media and gaming company had been discussing Singapore as a potential regional hub for some time now and geopolitical tensions accelerated its plans, according to people familiar with the matter.

Tencent has been considering to shift of some business operations — including international game publishing — out of its home country.

In 2019’s final quarter, Top international titles like Call of Duty Mobile and PUBG Mobile accounted for 23 per cent of Tencent’s US$17 billion gaming empire, according to the company.

Will by shifting to Singapore, Tencent can re-enter the markets they have been banned ?

The Indian government banned games and apps that had anything to do with the Tencent company, the ban included major titles PUBG Mobile and Arena of Valor.

This resulted in South Korea’s PUBG Corp withdrawing the Chinese company’s publishing rights for PUBG Mobile in India, after India banned the popular mobile battle royale alongside more than a hundred Chinese-made apps amid border clashes.

Can they re-enter India via Singapore ?

Hard to decipher at this stage.